The Munster Vales – An Innovative Approach to Rural Economic Development

‘A late summer trip in August 2021 to the Munster Vales was a welcome escape from the suburbs of Dublin after too many months of COVID-19 lockdown.  It also gave me an opportunity to see first-hand how the Local Authorities of four adjacent counties have come together to develop an innovative Rural Economic Development Zone, with the potential to capitalise on the tourism and heritage assets of the region’.

The Munster Vales is an area of Ireland which stretches from the Waterford coastline across to east Limerick, covering also parts of southern Tipperary and north Cork.  The area encompasses five mountain ranges and contains well-known attractions such as the Waterford Greenway, the Glen of Aherlow and the Rock of Cashel.  It is also home to many hidden gems in small towns and villages across the region.

The Munster Vales is marketed as an experience that offers an authentic slice of Ireland, through a journey from land to sea, blending history and heritage with modern Irish life.  The initiative is led by the Local Authorities of counties Tipperary, Limerick, Waterford and Cork and is supported by the Local Development Companies (often referred to as “LEADER companies”) in the region. 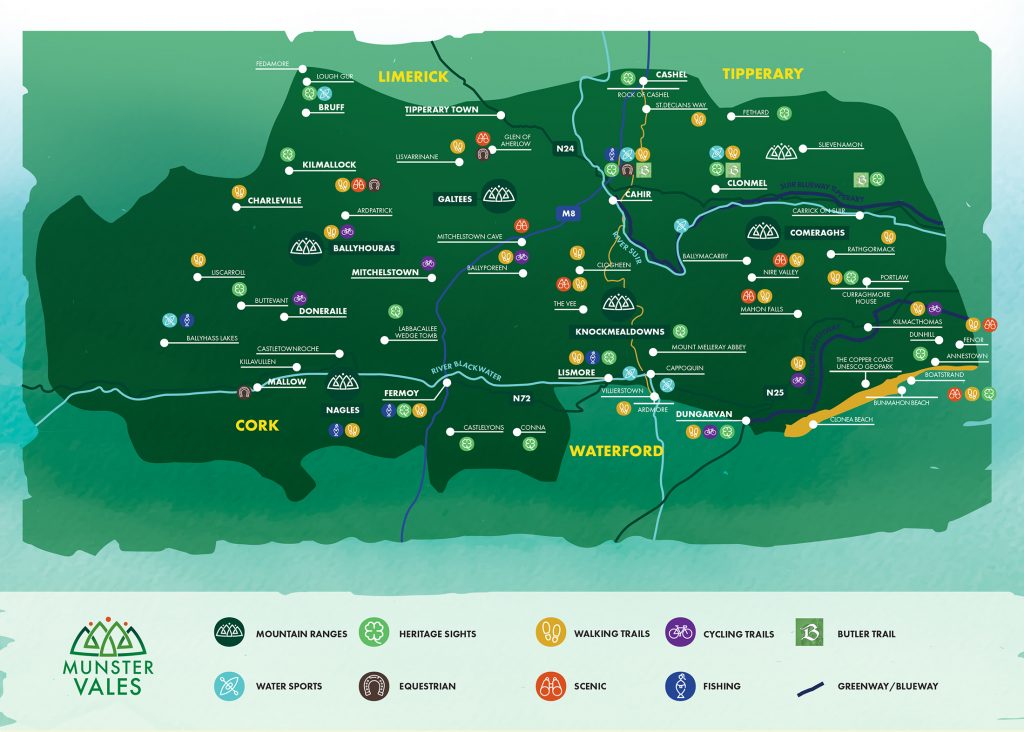 My visit to the Munster Vales centred on south Tipperary and north Waterford.  I based myself in Clonmel to explore the towns of Cahir and Carrick along the River Suir, as well as for the proximity of the Knockmealdown Mountains, the gateway to the small rural towns of Lismore, Cappoquin and Villierstown in Co. Waterford.  This area represents only a fraction of what there is to do and see in the Munster Vales, and return visits are definitely on the cards to sample more of the region’s attractions.

Although a relatively new initiative, the Munster Vales has all the necessary ingredients to become a key attraction for domestic and overseas visitors alike in the coming years.  The public’s appetite for outdoor activities has grown hugely as a result of the COVID-19 pandemic, with more people than ever utilising the numerous trails and amenities available throughout the country.  In this regard, the Munster Vales has lots to offer for those who enjoy walking, cycling and water-based activities, as well as hosting spectacular scenery and many heritage attractions.  Given the extent of its natural assets, there is a huge opportunity for the Vales to become a destination of choice for those looking for great outdoor experiences. 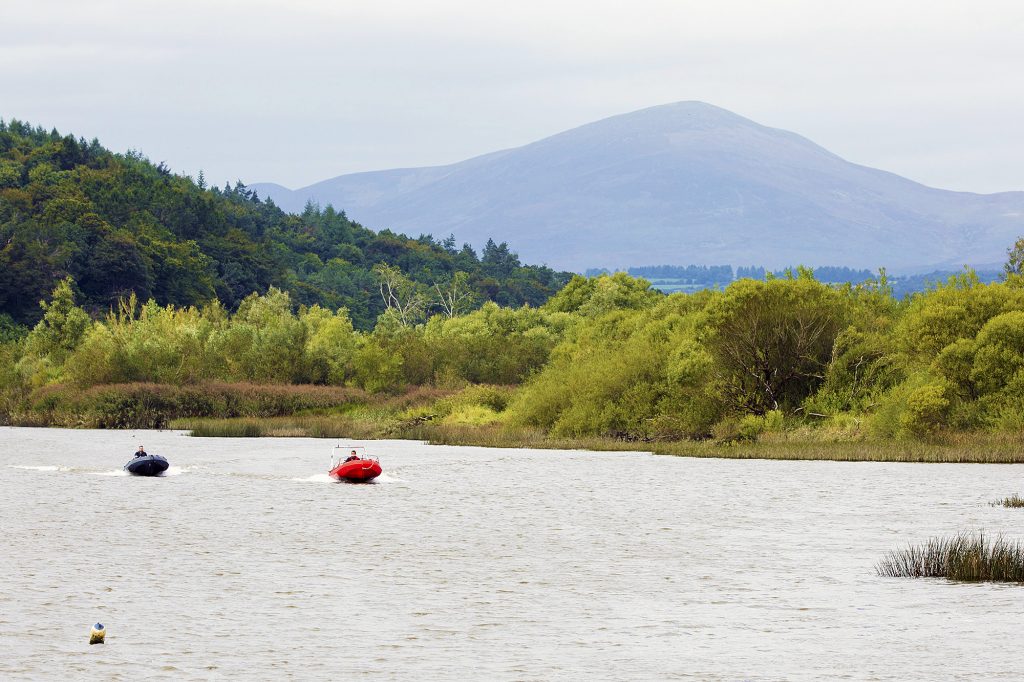 The Government has invested heavily in greenways, blueways and waymarked trails in recent years and has committed to continuing this investment.  Fáilte Ireland has also invested heavily in promoting outdoor activities as part of their campaigns for the Wild Atlantic Way, Ireland’s Ancient East and Ireland’s Hidden Heartlands.  A new National Outdoor Recreation Strategy which is expected to be published in 2022 will add further impetus to the outdoor tourism sector.

A five-year Strategic Plan for the Munster Vales, published in 2020 and supported through the LEADER programme, aims to grow and develop the Vales over the period 2020-2025 by maximising tourism business opportunities, focusing on community tourism and sustainability, and stimulating alternative enterprise in the region.  The Strategic Plan estimates that tourism in the Munster Vales area directly generates €266 million in revenue annually, a figure which can be expected to support 7,182 tourism-based jobs.

REDZ were defined in the CEDRA report as sub-county zones within which most people live and work. They were described as functional, rather than administrative, geographic areas that reflect how local economic activity operates in practice within a region.  REDZ areas can potentially span different Local Authority boundaries, but the central objective of the model is to utilise the natural synergies and interdependencies between rural towns and their hinterlands to generate economic activity locally. 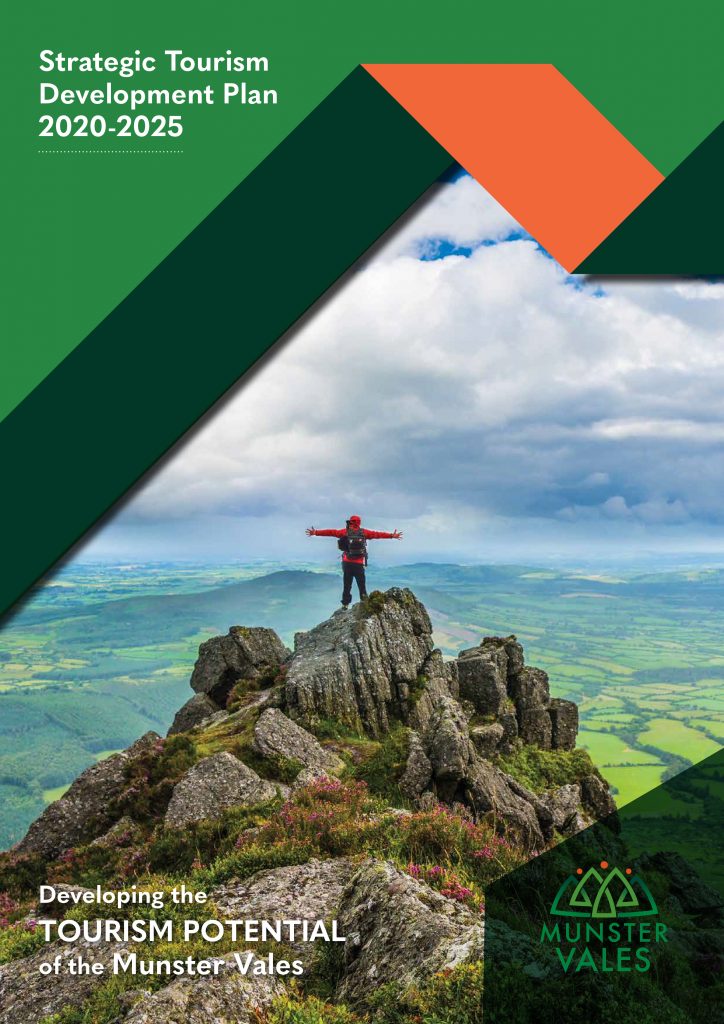 Dr. David Meredith of Teagasc mapped an extensive series of REDZ across Ireland for the CEDRA Research Report. The scale and strategic intent of the Munster Vales project is reflected in the fact that it spans approximately 11 REDZs.

A pilot REDZ scheme was launched by Government in June 2015, and approximately €10 million in funding was approved for almost 100 REDZ projects over the years 2015 and 2016.  The Munster Vales received funding of €399,000 under the REDZ scheme in 2016 as a Flagship project. The initiative subsequently received over €60,000 in funding from the LEADER programme between 2018 and 2021.  This included support for marketing and promotion of the Vales and to assist with the development of the five-year Strategic Plan.  Many other individual projects which will enhance the development of the Munster Vales have also received funding from LEADER and other programmes funded by the Department of Rural and Community Development.

Within the area covered by the Munster Vales, there are sub-clusters of natural economic zones, such as Clonmel and Carrick-on-Suir in Co. Tipperary, or Lismore, Cappoquin and Villierstown along the River Blackwater in Co. Waterford.  These latter three towns, separated by just 15 kilometres, collectively have an abundance of natural assets, heritage attractions, walks and trails, and water-based activities.

One activity well worth a visit is Blackwater Eco Tours which is operated by a community-based social enterprise in Villierstown, Co. Waterford. The LEADER Programme 2014-2020 supported this inspiring tourism business to purchase three self-drive boats for guided eco tours along the river Blackwater. The resultant growth of Blackwater Eco Tours, made possible through LEADER funding, has generated increased visitor numbers to Villerstown. This expansion has also had knock-on benefits for other businesses and services in the locality.  For example, Blackwater Eco Tours teamed up with a local glamping business to offer tourists a combined glamping and eco tour package. 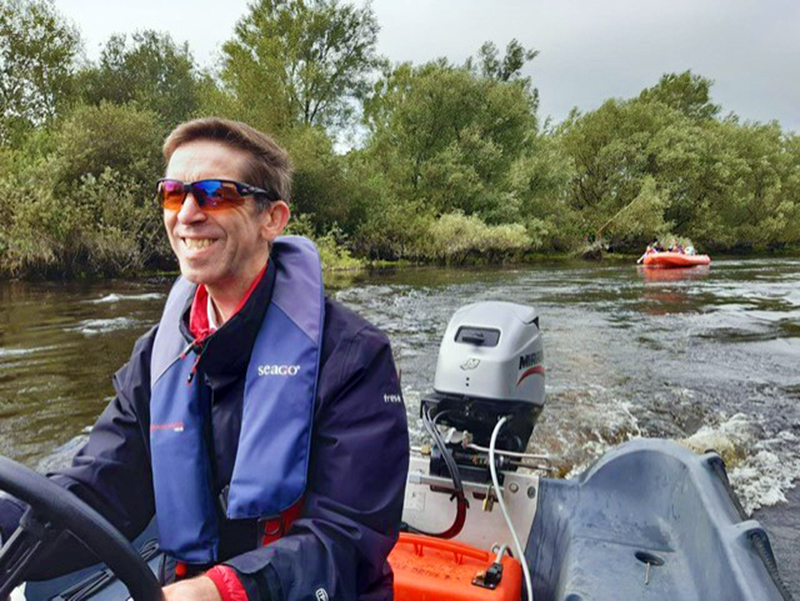 Collaboration between neighbouring towns through the REDZ model or the LEADER Programme in Ireland, working across administrative boundaries where appropriate, can play an increasingly important part in the development of Ireland’s rural economies. The Munster Vales project is a good example of this.

The benefit of interterritorial co-operation has long been promoted by the EU as a means of effectively sharing knowledge, experience and ideas between people in different rural areas and territories.  The LEADER Co-operation element of the Rural Development Programme is one mechanism designed to encourage rural areas to work together on joint projects with mutual benefits for each participating locality.  In both the LEADER Co-operation model and the REDZ model, collaboration between Local Authorities, local communities, business interests and other stakeholders (e.g. Local Development Companies, Fáilte Ireland), is an essential part of success.

The Department of Rural and Community Development is currently finalising a review of the 2015/2016 REDZ pilots.  In the meantime, the Transitional LEADER Programme 2021-2022 provides an opportunity for the development of similar collaborative initiatives through the allocation of €3 million for Co-operation Projects.

As a firm believer in the potential of rural economies and their contribution to national economic development, I will be following with interest the progress of the Strategic Plan for the Munster Vales.  I am also looking forward to visiting other parts of the region to experience more of what the Vales have to offer.

For further information on the Munster Vales, see www.munstervales.com.

You can freely download a PDF version of this blog here. 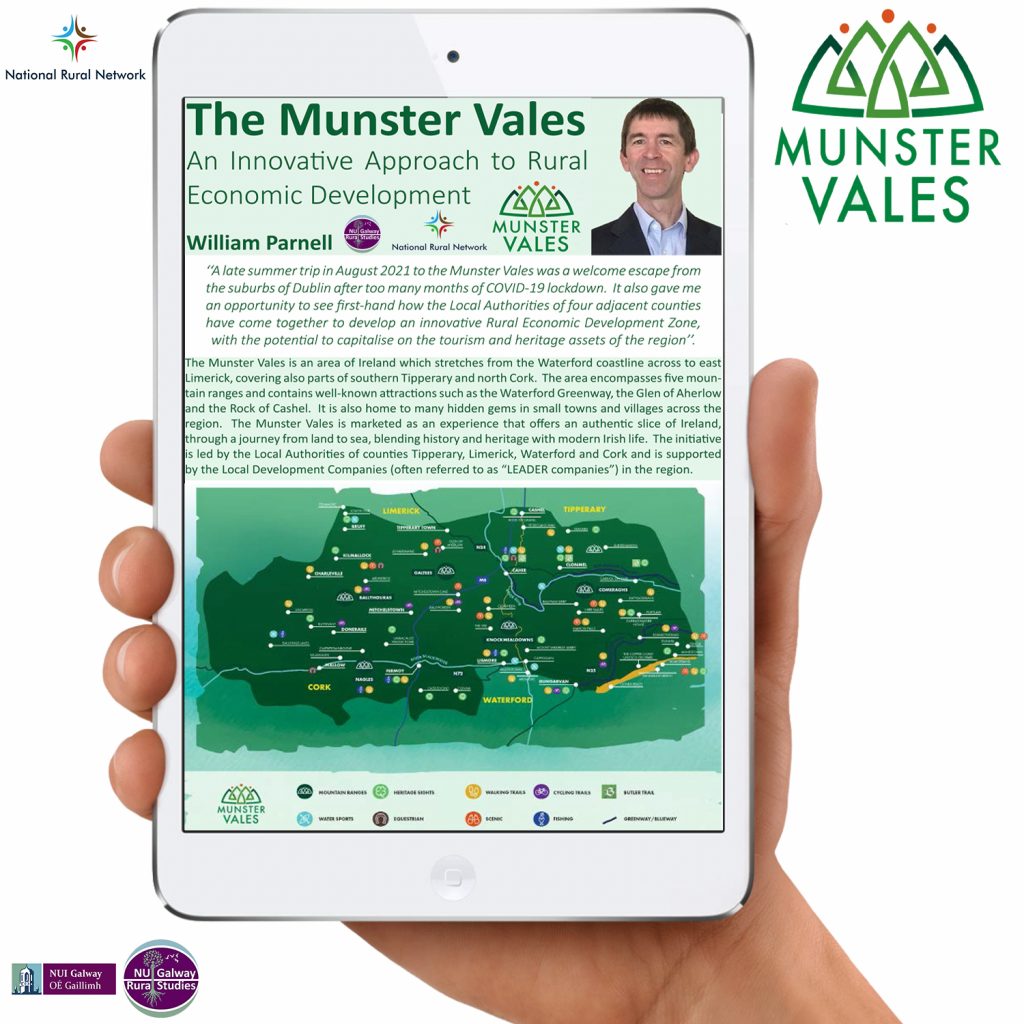 William Parnell is a former Assistant Secretary General at the Department of Rural and Community Development, where he headed the Rural Development, Regional Affairs and Social Enterprise Division from 2016-2021.  He was also a member of CEDRA.  The opinions expressed in this article reflect the author’s own personal views.