The ‘No Barriers Foundation’ has made an Exoskeleton Bionic Rehabilitation Suit operational in a rural setting allowing those with Neurological injuries and illnesses, such as spinal injury, stroke and MS, to rehabilitate in their own communities. The Suit is available in satellite locations around Donegal and can be hired by making an appointment. It is accompanied by a qualified physiotherapist at all times. This allows service users to avail of a self-sustaining and affordable service, which otherwise wouldn’t exist. This project recognizes a disadvantaged group in rural Donegal and gives them an opportunity to improve their social, physical and mental wellbeing. 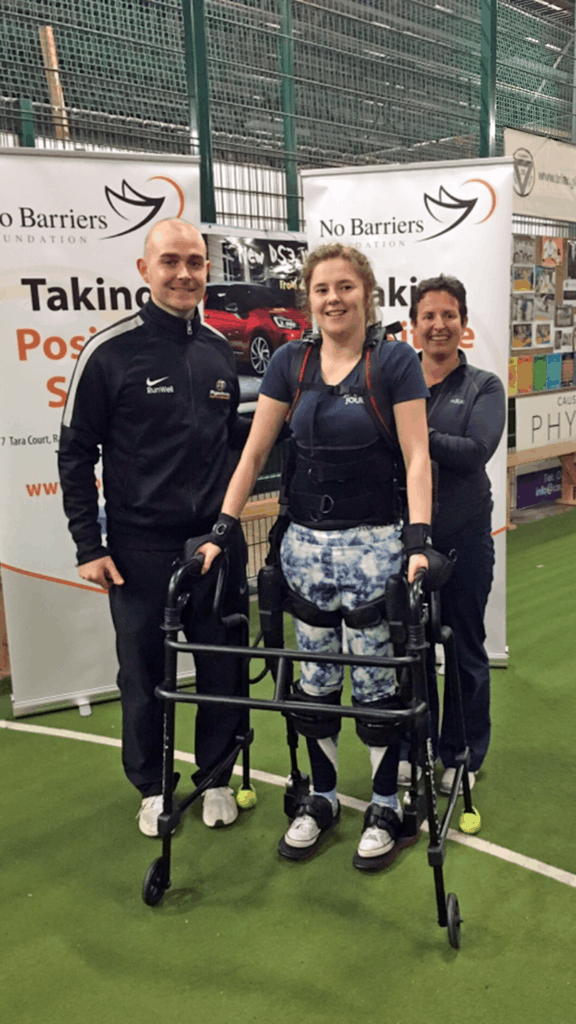 Demonstrating the use of the Bionic Suit. Image courtesy of the No Barriers Foundation

Since this project was started, the No Barrier Foundation has taken on 2 full time employees, with a 4 further 4 employees aiming to be subcontracted which will bring the total to 6. This project has facilitated job creation in an area where job creation is a key goal of local development.

The funding has had a massive impact on those with limited mobility / disability in Donegal. The Esko Suit ultimately allow persons with disabilities in hard to reach communities to access modern, innovative equipment which ultimately will change their lives, both mentally and physically.

While the Bionic Rehabilitation Suit has facilitated people to rehabilitate within their communities, it has also brought together a number of wheelchairs users, in particular, to train and rehabilitate side by side. Thereby, this helped developed a community in itself which helps with issues of with social inclusion and also issues of rural isolation, which is often prevalent in hard to reach communities.

This project was supported as part of the LEADER Programme 2014-2020 under Theme 2 ‘Social Inclusion’ and Sub theme ‘Basic Services Targeted at Hard to Reach Communities’. The Local Action Group is Donegal LCDC and Implementing Partner Donegal Local Development Company.