The second session of the NUI Galway Rural Studies Centre Seminar Series will feature John Daly, Economist at the Northern and Western Regional Assembly (NWRA). John will present an overview of NWRA’s recent report entitled ‘Regional Vacancy and Dereliction Analysis’, which has, using GeoDirectory commercial and residential data, identified just over 44,000 properties that were either vacant or derelict in the Northern and Western Region, accounting for 37% of all empty properties in Ireland. Furthermore, the analysis found that above average residential and commercial vacancy rates were evident in the majority of towns and villages located in the Northern and Western Region. On this basis, the Assembly has made several recommendations that should be considered as part of the development of the ‘Town Centre First Policy’ and other initiatives that aim to redevelop or encourage the redevelopment of empty properties.

Please register in advance for this Zoom meeting here: https://nuigalway-ie.zoom.us/meeting/register/tJcocuioqTIjH9IcpkgascjYLcxHeP7Akg1d 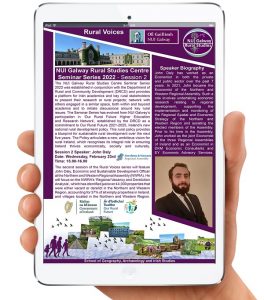 Over the past 7 years, John Daly has worked as an Economist in both the private and public sector. In 2021, John became the Economist of the Northern and Western Regional Assembly. Such a role involves undertaking economic research relating to regional development, supporting the implementation and monitoring of the Regional Spatial and Economic Strategy of the Northern and Western Region and assisting the elected members of the Assembly. Prior to his time in the Assembly, John worked as the joint Economist of the three Regional Assemblies of Ireland and as an Economist in DKM Economic Consultants and EY Economic Advisory Services.

After registering, you will receive a confirmation email containing information about joining the Zoom meeting.