The Irish National Rural Network (NRN) have stepped up their efforts to help stimulate knowledge exchange and boost innovation in agriculture and rural areas by producing an Irish language (Gaeilge) version of a booklet highlighting and promoting Ireland’s 23 EIP-AGRI Operational Group projects on behalf of Ireland’s Department of Agriculture, Food and the Marine (DAFM). This publication details the main aims, objectives, activates and background of each of the Ireland’s EIP-AGRI projects. It also features an informative infographic illustrating the geographical location of the Lead Partner for each of the Irish EIP-AGRI Operational Groups throughout the country. The majority of the projects are bottom-up, led by farmers who are passionate about the future of farming and the environment in their own communities.

As many of Ireland’s Operational Groups are located in native Irish speaking areas throughout the country (known as Gaeltacht regions), the NRN team at NUI Galway, Dr Shane Conway and Dr Maura Farrell, recognised the need and importance of respecting the heritage, culture and identity of these rural communities, particularly of the many farmers living within these areas whose first language is Irish. As innovation is a social process, more bottom-up or interactive than top-down from science to implementation, this locally tailored, ‘farmer-sensitive’ approach towards knowledge exchange will help bridge the gap between science, research and practice in the Gaeltacht regions of Ireland. Taking into account the social dimensions involved, by communicating and sharing EIP-AGRI material and expertise in their native tongue, will also ultimately lead to greater farmer engagement in the process, further strengthening farmer-led innovation and knowledge flows between research and practice at local level.

This integrated approach towards fostering innovation, supporting modernisation and enhancing knowledge exchange, tuned to the human side of agriculture and rural development, is essential in helping farmers and rural communities to ensure the long-term survival, continuity and future prosperity of the agri-food sector, traditional family farm model and broader sustainability of rural society. Indeed, the European AKIS (Agriculture Knowledge and Innovation Systems) ecosystem acknowledges and recognises the need for EU Member States to include social innovation and inclusiveness within their AKIS strategies and action plans, by taking into account the full range of rural socio-cultural contexts in their respective countries. The Irish NRN have adopted, and implemented this fundamental principle of AKIS through the application of place-specific EIP-AGRI knowledge exchange strategies and practices to help create innovative ecosystems in the native Irish speaking regions of Ireland.

The Irish language EIP-AGRI booklet was officially launched by the NRN and the DAFM at an EIP-AGRI Workshop entitled ‘EIP-AGRI: Lessons Learned Through Shared Experiences’ at this year’s Burren Winterage School on the 24th of October 2019. Speaking after this event, Dr Conway noted that it was ‘very encouraging to hear a number of Operational Groups Leaders from these Gaeltacht areas at the launch thanking the Irish NRN for recognizing and respecting the importance of the Irish language to rural dwellers and farmers in these communities by interacting with them in their native tongue in an effort to not only scale up innovation within these regions, but also to create a better connection with, as well as trust in, the EIP-AGRI initiative as a whole’.

This good practice example of fostering creativity and innovation in agriculture and interrelated fields at local level, is just one of a number of multi-method communication strategies being implemented by the Irish NRN to maximize the success of the objectives set out in Ireland’s Rural Development Programme (RDP) 2014-2020.

AKIS in Action on the Aran Islands, Co. Galway

AKIS came to fruition when the Caomhnú Árann EIP-AGRI Operational Group Project located on the Aran Islands, Co. Galway hosted a visit from another Operational Group located in another Gaeltacht (irish speaking) area located in northwest Co. Donegal, Cúlra Créafóige. The Cúlra Créafóige project is rehabilitating disused lands, improving biodiversity through regenerative agriculture and encouraging cottage industry by revitalizing local cultivation activities. Small scale tillage is still a feature on Inis Meáin, Aran’s middle island, with crops of potatoes, rye, cabbage, turnips, leeks and onions grown throughout the island every year mainly for domestic use but also for local restaurants and cafes. The island of Inis Meáin was therefore a natural choice to host the project team and farmers participating in the Cúlra Créafóige Operational Group and share information.

During the visit, the Cúlra Créafóige members had a chance to visit the thatched cottage ‘Teach Synge’ during this visit, in which the playwright John Synge stayed during his time on Inis Meáin and had an opportunity to hear from Ciarán Ó Fatharta about rye growing on the island and how it was used to maintain the thatch on the cottage. Later Seán Ó Domhnaill from the Caomhnú Árann project showed the Donegal group the crops grown on his farm, explaining the traditional techniques in both growing and storing the crop.

Whilst Caomhnú Árann host a range of visits each year this was the first time a farming group from another Gaeltacht area have visited, allowing both participating groups to communicate in Irish, which is an added bonus of the EIP-AGRI structure with the range of small community based groups throughout Ireland in Gaeltacht and non-Gaeltacht areas.
Gráinne Ní Chonghaile from the Caomhnú Árann project team, explains that Irish is ‘the first language of participants in the Caomhnú Árann project and that in general the participant farmers have a preference for doing their business through Irish where possible’. She highlighted how important it is that this has been recognised by DAFM and the NRN, in publishing the EIP-AGRI projects booklet through Irish. Grainne added that this booklet is ‘a useful resource for dissemination purposes within the local community, local schools and the wider public’.

‘Ní neart go cur le chéile.’ – There is no strength without unity 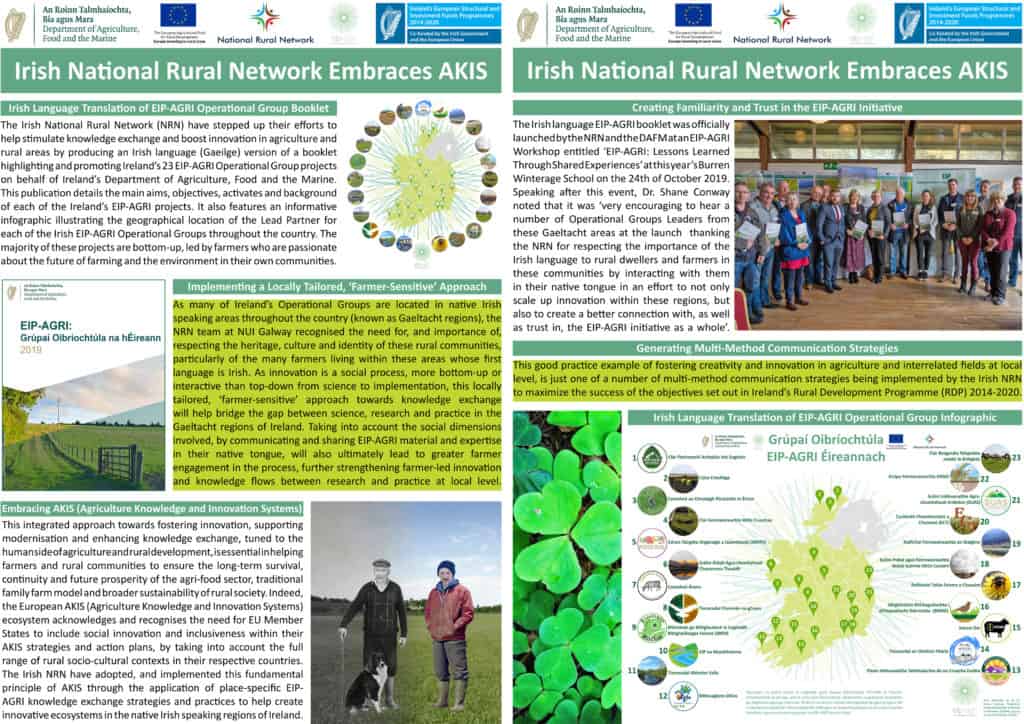 For more information on the EIP-AGRI initiative in Ireland please email the DAFM EIP-AGRI division (eip@agriculture.gov.ie) and/or visit the EIP-AGRI section of the National Rural Network website.

More Information about AKIS can be found here: https://ec.europa.eu/eip/agriculture/en/tags/akis