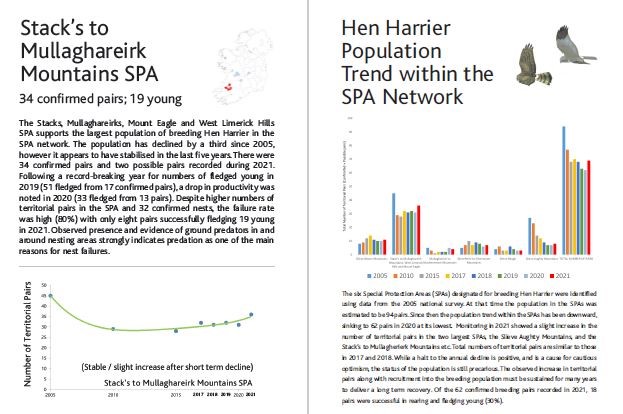 The Hen Harrier Project is an ongoing EIP-AGRI project aiming to sustain viable Hen Harrier populations in an economically and socially sustainable model by recognising and valuing ecosystem services as an output from the farm. The project monitors the numbers of territorial Hen Harrier pairs and their breeding outcomes in each Special Protection Area (SPA) included in the project during breeding season.

The Hen Harrier Monitoring Report 2021 presents the results of more than 785 individual observations that took place in 2021, equating to over 2,268 hours of surveyor effort. The results in this report show that:

The report breaks down the 2021 monitoring results and trends of each of the individual SPAs in the project; Mullaghanish to Musheramore, Slieve Aughty Mountains, Slieve Beagh, Slieve Bloom Mountains, Slievefelim to Silvermines and Stack’s to Mullaghareirk Mountains.

The full Hen Harrier Monitoring Report 2021 can be downloaded here.

More information about the Hen Harrier Project can be found here.