The NRN attended the launch of the FarmPEAT EIP-AGRI Project on the 29th of July 2021 at Clara Bog Visitor Centre, Co. Offaly. 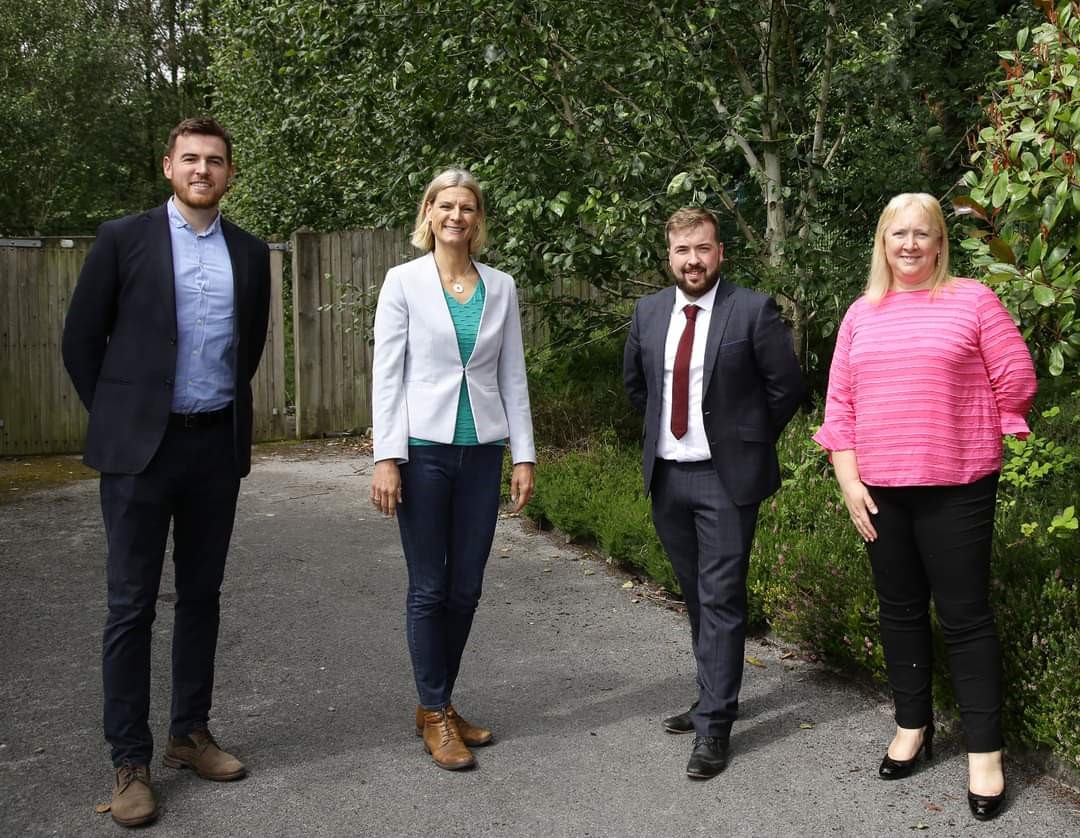 This project is developing a locally-led, innovative, results-based farm scheme for farmers who manage lands that surround some of Ireland’s finest remaining raised bogs. The protection of our remaining raised bogs is a national priority and the agricultural lands that surround these bogs will play an important role in their long-term conservation. The FarmPEAT Project will be working with the farmers and the local communities to design and develop a programme that will deliver both for the environment and the farming community.  Minister of State at the Department of Agriculture, Food and the Marine, Senator Pippa Hackett, officially launched the €1.2 million scheme and had  the opportunity to meet both the FarmPEAT team and some of the farmers taking part in the pilot project. Minister Hackett said at the launch “it is an honour to partake in the launch, not just as a minister, but as an Offaly woman and a fellow farmer”. The launch took place in Clara, Co. Offaly on Thursday 29th July and is one of many in a series of EIP projects funded by the Department of Agriculture, Food and the Marine (DAFM) under Ireland’s Rural Development Programme (RDP). In total, the Department has committed €64 million to these EIP-AGRI projects over the lifetime of the RDP.

Speaking at the launch Minister Hackett said: ‘It’s encouraging to see work beginning on these inland bogs. Raised bogs represent one of the most valuable natural ecosystems in Ireland and the appropriate management of adjacent agricultural lands that surround them can play an important role in maintaining and enhancing their long-term conservation value.’

Commenting on how the work will be undertaken, the Minister continued: ‘The project will work with local farmers to design and trial a programme especially adapted to the local landscape. It will reward farmers for improved management of habitats on peat soils along with other important landscape features such as eskers, field boundaries and watercourses.  All of that will I believe combine to deliver enhanced environmental outcomes.’

Caroline Lalor, the Project Manager added: “We are delighted with the interest that local farmers have expressed in the Project.  We are offering 42 farmers a contract for the first year and are planning to offer additional places next year”. She continued “it is wonderful to see so many of the pilot farmers here today and we look forward to working with you over the next two years.”

The new locally-led programme brings together farmers, farm advisers, scientists, and researchers to deliver a targeted landscape level intervention which places the farmer at the heart of the process. The programme will be results-based in that farmers will get paid based on the scores they achieve, with higher scores, indicating higher environmental quality, securing higher payments. Donal Sheehan from the BRIDE project spoke about the importance of schemes such as FarmPEAT and the value they have to the local community. He said “it is a privilege to participate in an EIP, it is an opportunity to these participants to forge their future, not just follow”. He continued “the success of all EIP’s is based on the people managing them, and the FarmPEAT team is utterly keen on its success and viability. They are going to work on the ground, with the farmers, to create something that is beneficial for agriculture and for the environment. This has never happened before, and the funding from the government has given this team the chance to build something great with the farmers and their communities, which this country will benefit from.

It is hoped that this programme will form a basis for future agri-environmental schemes in these areas. As such it presents an opportunity for farmers to be involved in developing policy that could provide long term environmental and economic benefits to their communities into the future.

The Minister joined the FarmPEAT team for a visit to both the famous Clara Bog Boardwalk and a local farmer’s land. A special thank you to Brian Sheridan for giving us the opportunity to see the magnificent view from his farm. Mr. Sheridan spoke with the minister about the importance of the bog and the pressures the farmers face who are adjacent to them.

Thanking those involved Minister Hackett concluded:  ‘As we strive to reach challenging climate change targets, the work planned here will help Ireland transition towards more sustainable use of our peatlands.  So I want to congratulate Caroline Lalor, the project manager of FarmPEAT, on the work done so far in setting up this exciting new project.   She has a strong team with her, and I wish them  every success in the future”.

For further information about the project please contact: Paddy Malone (FarmPEAT Project Public Liaison Officer) at paddymalone@farmpeat.ie or visit their website at www.farmpeat.ie. 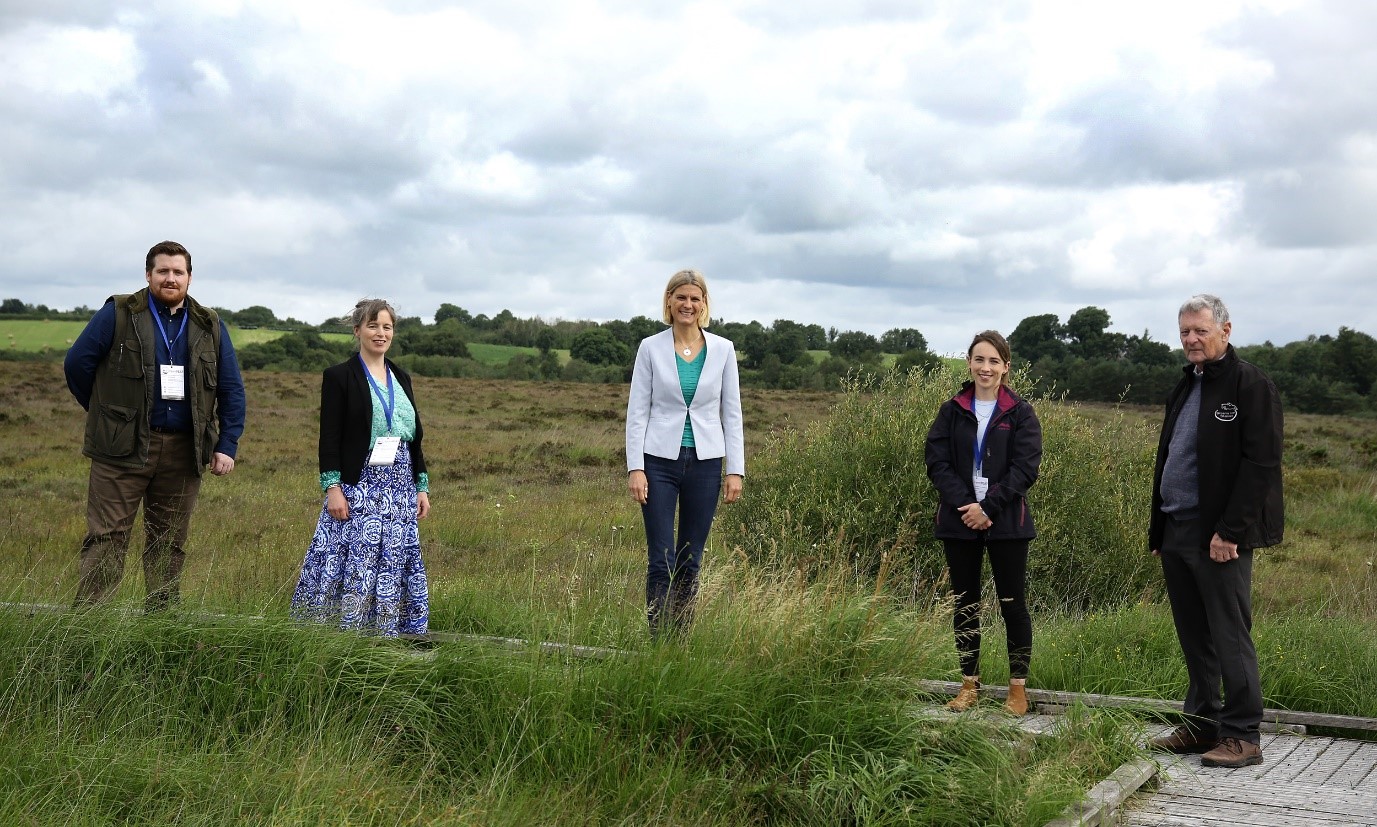 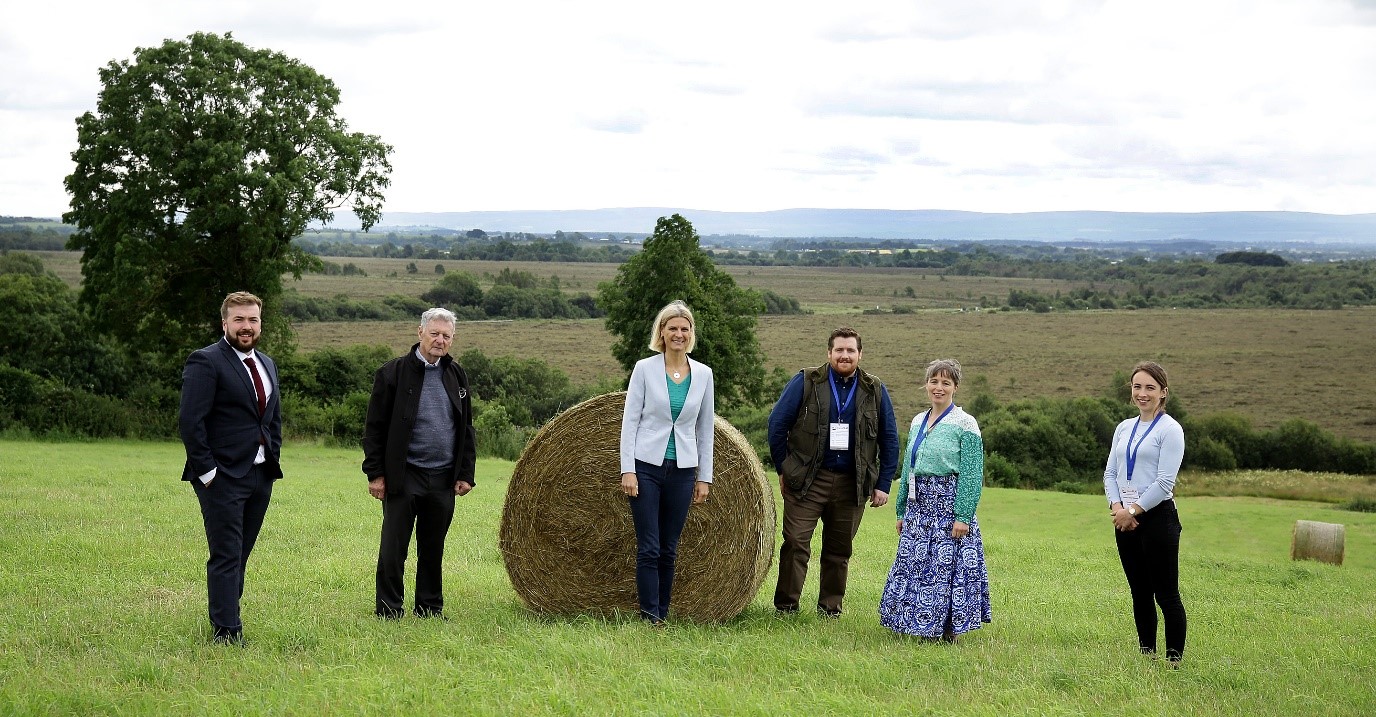 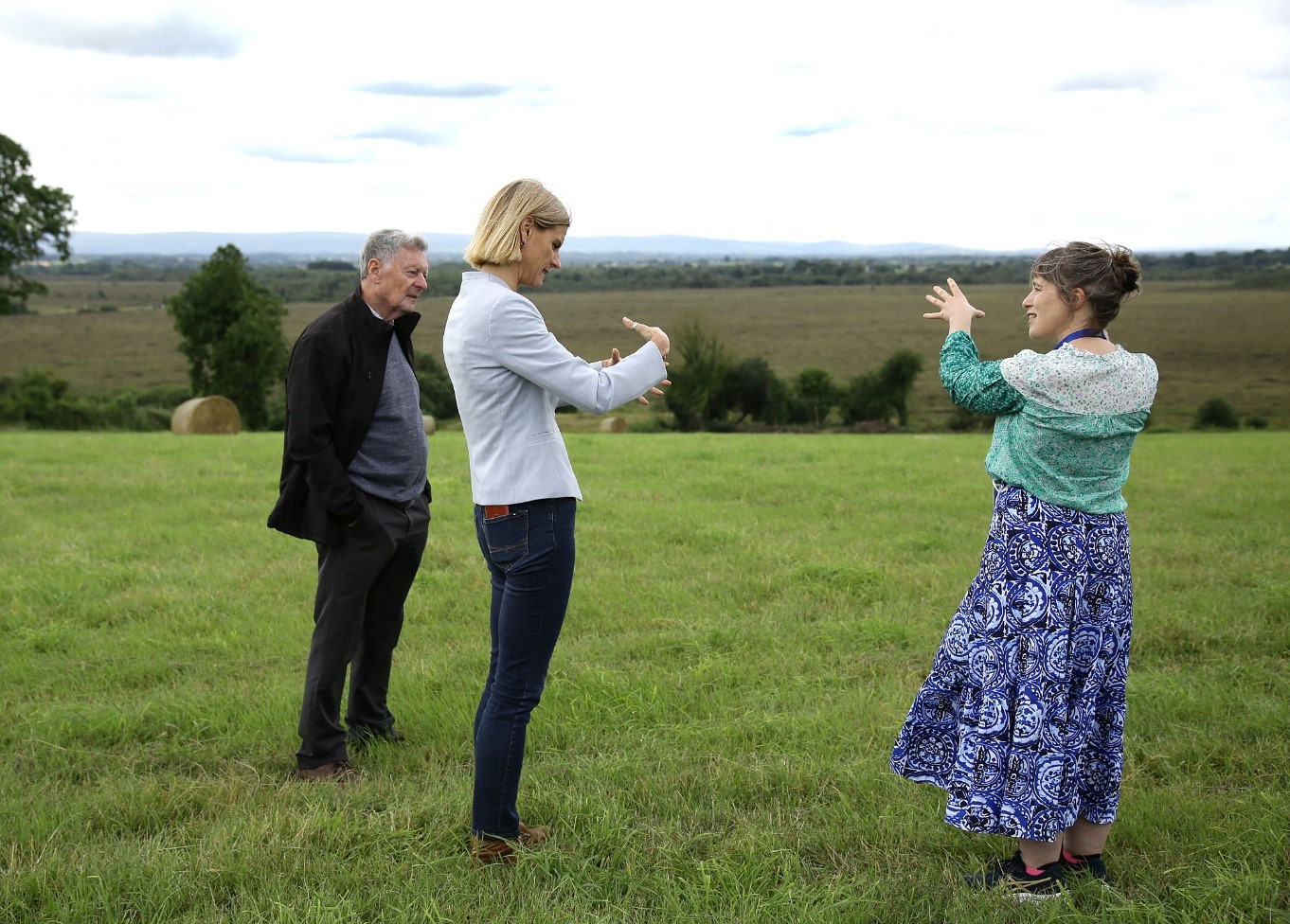 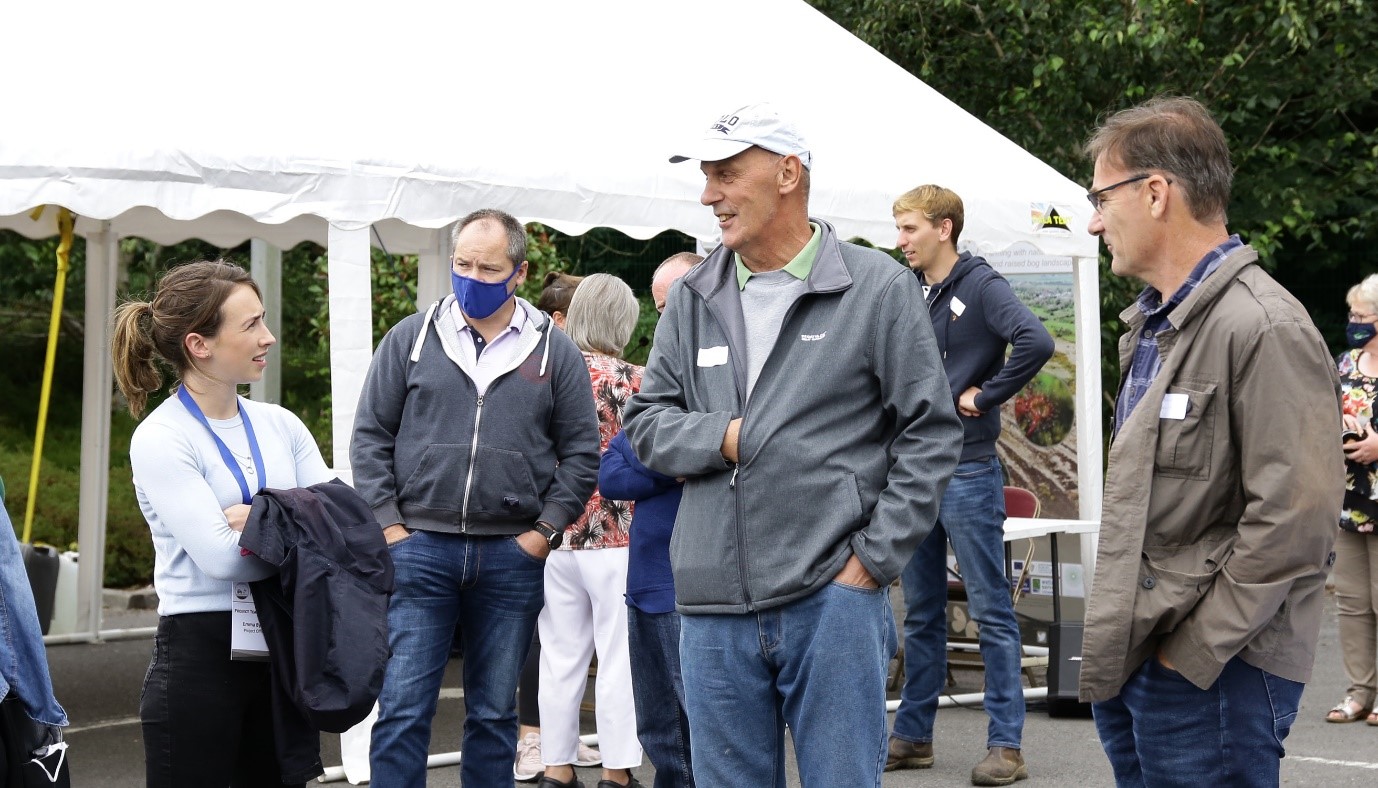 Project Officer Emma Byrne talking with some of the participant farmers at the launch event.