The Minister for Agriculture, Food and the Marine, Michael Creed T.D. has today announced the commencement of approvals of over 2,090 applications under the most recent Tranche of TAMs scheme. These applications were received under Tranche 12 which closed on 7 December 2018 and represent the fourth highest number of applications to date by tranche to date. The estimated value of all applications received in Tranche 12 is €30.5m. 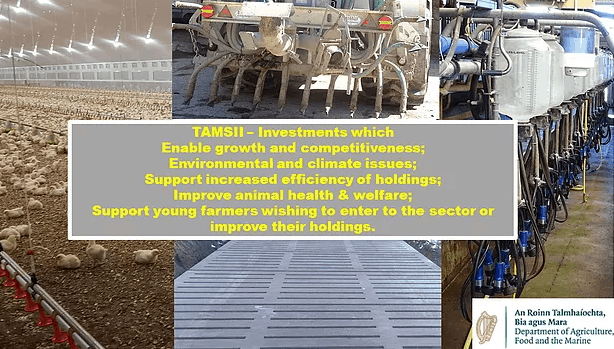 The Minister commented “I am delighted with the continued interest in the suite of seven measures available under the TAMS scheme. There are now over 22,900 applications received under the scheme to date including over 2,000 applications in the latest tranche. Over €103m has been paid out to farmers so far under the Scheme with weekly payments currently averaging over €1.2m.

The Minister has also announced the extension of meal bins as an eligible investment for all sectors in the list of items available under TAMS II with immediate effect. The current tranche of TAMS II opened on 8 December and will close on 5 April 2019. Meal bins can be applied for now using the online application system. The TAMS II system of penalties for late submission of payment claims has also been revised with increased flexibility and graduated penalties introduced for late submission.

Commenting on these changes, the Minister commented “In response to requests to make meal bins available to all sectors, particularly after the fodder challenges faced by farmers in 2018, I have decided to extend their provision to all sectors with immediate effect. This will be of particular interest to the beef and sheep sectors. We have also favourably reviewed the penalty situation for late submission of payment claims and my Department will be in direct contact with farmers impacted by these changes in the coming weeks”