Targeted Agricultural Modernisation Schemes (TAMS II) were launched in May 2015 to support the sustainable development of Irish agriculture. The grant- aid provided enables farmers to meet the challenges of climate change and to increase efficiency on their holdings.

The TAMS II Scheme is made up of:

The Low Emission Slurry Spreading scheme (LESS) offers grant aid for efficient slurry spreading equipment. The scheme is designed to encourage the purchase by farmers of specialised slurry spreaders and/or attachments. There are a number of machines available such as trailing shoe, dribble bars, shallow injection systems and umbilical slurry spreading systems. These spreaders are designed to minimise nutrient loss during the application of slurry which will help Ireland to achieve reductions in greenhouse gas emissions including reductions in nitrous oxide emissions, and ammonia emissions.

TAMS II offer a 60% grant rate to eligible young farmers and a 40% grant rate to all other farmer who meet the scheme criteria. Grant rates are subject to a maximum eligible investment of €40,000 or €60,000 in the case of a joint application by two eligible applicants or partners under a registered partnership.

Derek Beirne, a farmer and agricultural contractor from Elphin Co. Roscommon, availed of TAMS II funding to purchase a dribble bar. The dribble bar cost in the region of €16,000. Derek expects to receive a 40% grant on the investment through the TAMS II LESS scheme.

“The hoses of the dribble bar trail just above the ground placing slurry at the root of the grass, this prevents covering the grass leaf which reduces photosynthesis a key process of grass growth. Placing the slurry at the base of the grass also prevents nutrient loss.”

Derek has over 200 farmer clients who he provides multiple contractual jobs for such as silage cutting, harvest and fertiliser and slurry spreading. 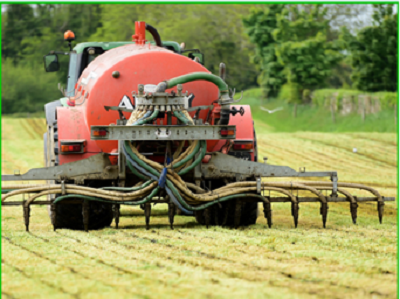 “With the GLAS scheme providing a payment of €1.20 m3/year to farmers for low emission slurry spreading, demand for LESS has increased dramatically since the opening of GLAS. All of the slurry produced or imported on the farm must be spread using LESS equipment. The benefits of LESS are more efficient use of nutrients by the crop, resulting in lower use of artificial fertiliser. Reduced run-off from the land leading to improved water quality and reduced odour from the slurry.” Derek concluded; ‘’ without the funding received from TAMS II wouldn’t have been in a position to invest in a LESS Slurry Spreader. The financial incentive under the GLAS Scheme is creating the demand among farmers for the Low Emission Slurry Spreading”.