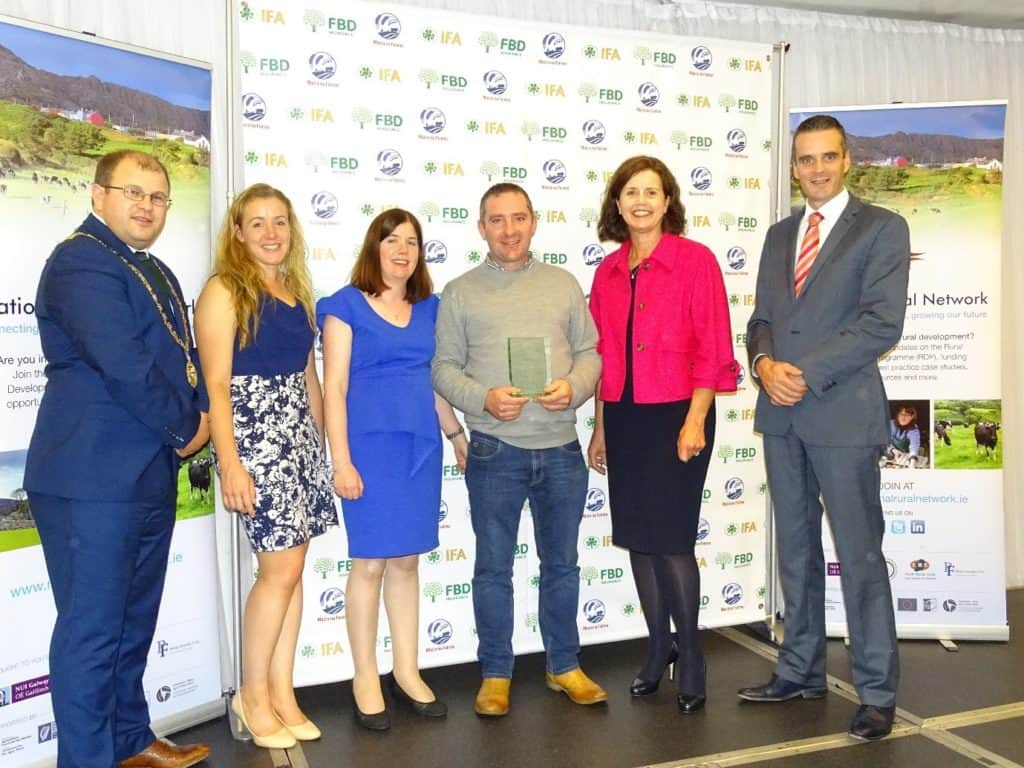 Ireland has a vast array of native fauna and flora which relies on sustainable farming methods to protect, enhance and halt the decline of biodiversity in Ireland. Ireland’s landscape and its associated biodiversity have been shaped by agricultural activity, and our rural landscapes are characterised by the diverse habitats associated with farmlands namely hedgerows, stone walls, ponds and streams, native woodlands, bogs and species rich- pastures. However, despite our diverse habitats some of our most important plant and animal species are under threat.

The National Rural Network Biodiversity Farmer of the Year Award hopes to draw attention to this complex issue, by celebrating farmers who are farming in sustainable manner by protecting and enhancing biodiversity on their farms. The award is presented by the National Rural Network (NRN) in conjunction with Macra na Feirme, and it is part of the FBD Young Farmer of the Year competition.

It is important to acknowledge that farmers are taking action at farm level to protect and conserve habitats and wildlife on farms as well farming more efficiently. Agriculture relies on biodiversity in many ways: bees pollinate crops, earthworms build soil fertility, bacteria and soil biota breakdown nutrients and birds and insects keep plant pests and diseases in check.

Biodiversity is threatened by climate change, pollution, development and habitat loss. Ireland declared a “climate and biodiversity emergency” in May 2019 which highlights the importance of protecting and restoring biodiversity in Ireland. Farmers play an important part in protecting the environment and its biodiversity by farming in a sustainable manner; sustainability will soon be a key driver for every management decision made on farms.

The plight of one of our key pollinators, the bee, highlights the scale of the challenge. In Ireland, there are 98 different species of bee. One-third of our bee species are at risk of extinction.

Many farmers are already implementing these actions on their farms to protect bees.

Farmers can avail of supports through schemes under the Rural Development Programme (RDP 2014-2020) to implement actions on their farms that will encourage biodiversity. Measures undertaken by farmers under schemes such as GLAS (Green, Low-Carbon, Agri-Environment Scheme), Knowledge Transfer Scheme (KT Scheme), the Organic Farming Scheme and European Innovation Partnerships (EIP-Agri) have already delivered many positive impacts on biodiversity. These include:

Raymond Langan, a sheep farmer from Co. Mayo, won the inaugural National Rural Network Biodiversity Farmer of the Year Award in 2018. He was chosen as the winner for his unwavering enthusiasm for protecting the environment and enhancing biodiversity on his farm. This year’s winner will be announced on 26th of November 2019 at the FBD Your Farmer of the Year Awards in Dublin.

We use cookies to ensure that we give you the best experience on our website. If you continue to use this site we will assume that you are happy with it.Ok